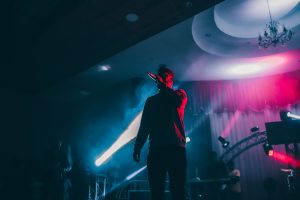 I am a member of a Facebook 80s Cover Band Group and lately I have been sitting in front of my screen, bag of popcorn in one hand, mouse in the other and mouth on the floor, just watching the circus unravel. It all started with one post about Queensland’s largest Music Agent at that time. I worked with him as a performer and as an agent for a year until I went into labour in his offices at Fisherman’s Wharf. (now that’s a story 😊)

It’s fascinating to observe the vitriol and abuse unfold by musos who used to gig or wanted to gig in his circuit. I’ve heard these same musos rave about the good old days and how much they wish that gigs in 2019 were like they were back then. The irony is that without this ”Agent”, those good old days never would have happened. He built the circuit. It was his creative sensibility, his entrepreneurship, his relentless dedication to demanding a higher standard in the music industry that gave Queensland the highest standard of shows (local and touring) in the history of this industry.

Over the years I have read and deleted similar vile abuse about our own company and I just shake my head and feel sorry for these people. How does trolling change anything? If these same Artists dedicated the time it takes to troll instead to rehearsing new songs, updating their promo, engaging on Social Media and actually building a credible Music Brand, then they would be gigging far more, earning more $$ and be too busy to waste time on crap that means nothing.

Maybe its just me, but if you feel strongly about something, why not take the action required to make some real contributions to the area of your passion?

This “Agent” certainly did. What you see on the outside is NEVER what is ACTUALLY going on from the inside. The mechanism of the 70s and 80s was very different to today. Without mavericks like this guy, there WAS no mechanism. An entire industry survives due to the toil and sweat of him and his team.

Hand on heart - I was one of those trolling him as a muso in the early days. I was naïve and had no clue about the reality of doing business in the Music Industry. I thought I knew. I had no bloody idea. 😊 I do now though..........It takes real courage. It takes super creative out of the box never before tested strategy. It takes grit. It takes intelligence. It takes unswerving determination. It takes everything that you have no idea about and everything that terrifies you but compels you to bloody do anyway.

I also knew that my model was very different to his as my trajectory was on a totally different pathway in the industry.
And as a fellow traveller, I will never stop feeling gratitude for his major contribution to this industry.

And the best quote ever, comes from him in this awesome on line discourse: “Barnsey said "Hutcho you made the talented musos and bands very happy and the untalented ones very unhappy and that is what good agents do.....and thanks for being the best and assisting us when we were no one"